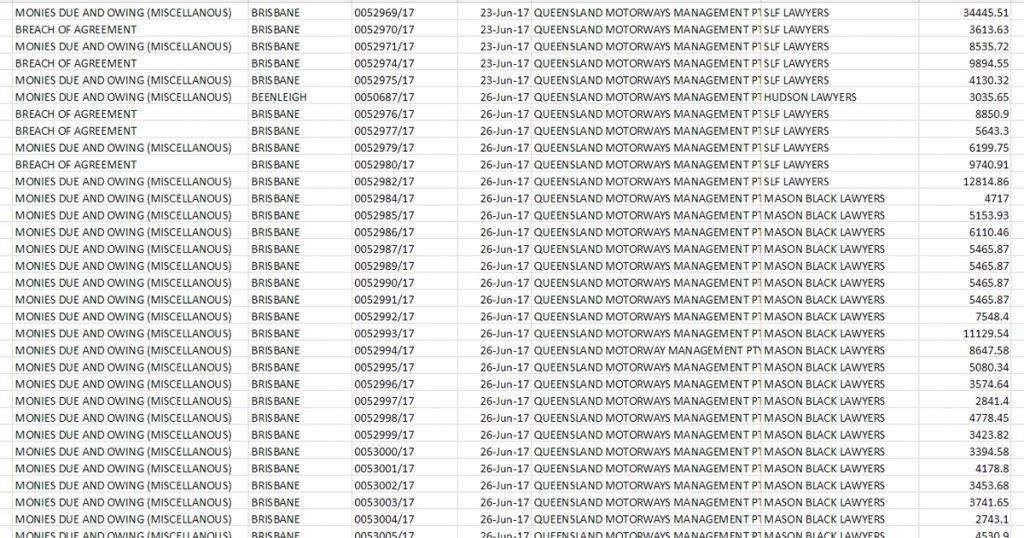 According to Queensland Magistrate court records that were recently obtained by Toll Redress, in the month of June 2017, Transurban (go via) filed 505 Statements of Claim against Queensland motorists, via their subsidiary Queensland Motorways Management.

In some cases, the acting law firm will provide an affidavit from Queensland Motorways Management that has been signed off by their Senior Credit Officer. In the affidavit, the officer attests that “The debt of xxxxx (“Debt”) mentioned in the statutory demand is due and payable by the Debtor Company pursuant to the Transport Infrastructure Act 1994 (QLD)”.

We find it interesting that Transurban ($TCL) - the parent company - who are a publicly listed company, would be comfortable having their senior employees sign off on affidavits and court documents, attesting to the fact that they genuinely incurred thousands of dollars in administration costs - in addition to legal costs - to pursue a motorist who has less than $1,000 in unpaid tolls. In some cases the administration charges are in the tens of thousands for less than $5,000 in unpaid tolls.

The law firms representing Queensland Motorways Management are Hudson Lawyers, Mason Black Lawyers and SLF Lawyers. If you have received a Statement of Claim, or owe thousands in administration fees, please contact us as we may be able to help.